Lovers and Other Stranglers: Alfred Hitchcock's STRANGERS ON A TRAIN 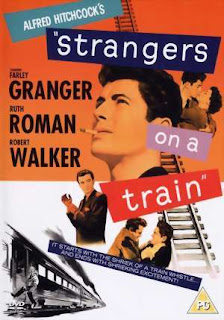 Some people complain that they can’t read the same suspense novel multiple times, because they know how it all turns out. That doesn’t hold true for me; in fact, I read the endings of mysteries first! If the ending intrigues me enough, I’ll start over and read the book from start to finish. Same goes for movies; somehow I’m always able to watch them with fresh eyes no matter how many times I’ve seen them (though if the fam and I are watching movies at home, we’re not above making the occasional good-natured quip about some element in a much-viewed, much-loved movie). I first saw and loved Strangers on a Train (SoaT) during my childhood in the , when my older brother and I watched it on The Late Late Show (the middle-of-the-night movie show, not Craig Ferguson’s CBS talk show). In all the years I’ve seen SoaT since then, I’ve noticed many things about the film that somehow escaped me during countless viewings.
Loosely adapted from Patricia Highsmith’s novel, the SoaT script was begun by mystery writer extraordinaire Raymond Chandler. When and Hitchcock failed to get along, Ben Hecht’s assistant Czenzi Ormonde took over for , with an assist by Whitfield Cook. (No surprise; the ornery also couldn’t get along with Billy Wilder when they worked together adapting James M. Cain’s Double Indemnity to the big screen.) It all starts on a train, where tennis player Guy Haines (Farley Granger) accidentally bumps his sensibly-shod feet against Bruno Antony’s (Robert Walker) snappy two-tone shoes. Brightening, Bruno asks, “I beg your pardon, but aren’t you Guy Haines?” As they talk, it turns out Bruno is a big fan of Guy’s—such a big fan, in fact, that he’s been following Guy’s exploits in the gossip columns as well as on the tennis courts. Bruno’s been reading up on Guy’s society sweetie, Anne Morton (Ruth Roman), the daughter of Senator Morton (Hitchcock perennial co-star Leo G. Carroll), and the lovebirds’ intent to wed as soon as Guy can divorce his two-timing, knocked-up slut of a wife, Miriam Joyce Haines (Laura Elliott, better known as Kasey Rogers, who played Mrs. Larry Tate on TV’s Bewitched). Boy, TMZ has nothing on Bruno!
Bruno is full of wild ideas, including one for the perfect murder. “I used to put myself to sleep at night figuring it out,” he sighs blissfully.  His plan involves getting two people who’ve never met before—like, say, Guy and himself. Each of them has someone they’d like to kill—like Miriam, and Bruno’s hated father. Each man commits the other man’s murder: “Crisscross!”  Bruno figures that since neither man has a motive to kill the folks they’ve killed, theoretically they’ll never get caught. Guy, being a decent, non-homicidal fellow, laughs off Bruno’s wild ideas as the blatherings of a somewhat pesky but harmless kook before leaving the train—not realizing he left behind the monogrammed cigarette lighter Anne gave him. Aw, how nice of Bruno to hold onto the lighter for Guy…. Unaware his lighter went AWOL, Guy stops at his hometown, Metcalf, a town that seems to be somewhere between and . (Anyone here know for sure?) Guy brought money to pay for the divorce Miriam has been hounding him about—but now that she’s pregnant with another man’s baby (or so she claims; my husband Vinnie and I have always suspected the conniving Miriam was baby-free and trying to pull a fast one), and realizes “what all that tennis nonsense of yours (has led) to” in terms of money, prestige, and the glamorous life, the sly little bitch doesn’t want to ditch. Indeed, she’s blackmailing Guy into keeping her! “Make a pretty story,” Miriam purrs, “the Senator’s daughter involved with a married man. Especially when he’s about to become a father.” Breaking the bad news to Anne in a phone booth, Guy shouts, “I could strangle her!” Uh-oh, not the best choice of words, Guy….
When Bruno hears of Miriam’s thumbs-down on the divorce, he springs into sly, sinister action. Looking innocently dapper, he tails Miriam and her two boy toys to the Metcalf carnival in a suspenseful yet arousing game of cat-and-mouse between suave but psychotic Bruno and the flirty, unsuspecting Miriam. Nice touch with Miriam making jokey yet multi-layered references to “satisfy(ing) my cravings,” which her dates don’t pick up on (to borrow a line from Dial M For Murder, “but we do, don’t we?”). Bruno catches up with Miriam and strangles her in that iconic scene where her murder is reflected in her fallen eyeglasses. For me, the cries for help in the dark when Miriam’s dates find her corpse is almost as chilling as the murder itself.

Later that night, Bruno intercepts Guy as our hero’s about to enter his home. He gives Guy the late Miriam’s broken glasses the same way a cat drops dead rodents or birds at their human’s feet. “I was very careful, Guy,” Bruno calmly but proudly assures our horrified protagonist. “Even when I dropped your cigarette lighter (at the murder site), I went back to pick it up.” Guy, of course, never dreamed nutjob Bruno was serious about his murder-plot ramblings, and he sure as hell isn’t about to bump off Bruno’s dad! How could he, even if he wanted to? Guy was on the train again at the time of Miriam’s murder, and he struck up a conversation with tipsy Delaware Tech Professor Collins (memorable bit by John Brown, Life of Riley’s Digger O’Dell), treating Guy to snappy patter and a song: “There was a man/who had a goat….” Too bad Professor Collins can’t remember their chat when he’s sober. As Guy explains to Senator Morton, Anne, and sweet, saucy teenage sister Barbara (played endearingly by Hitchcock’s scene-stealing daughter Patricia Hitchcock. More about Pat shortly), “When an alibi is full of bourbon, sir, it can’t stand up.” You’d think that Guy having seen the pickled professor on the train would be enough to clear him, but it’s a case of right place, wrong time: the Metcalf police’s timetable shows that Guy could’ve left the train in time to kill Miriam, then hopped aboard another in plenty of time to join Professor Collins for a goat-themed concerto.
Even worse, there’s no way in hell Bruno’s gonna let Guy off the hook, especially since he still has our hero's monogrammed lighter to plant on the murder site to pin the crime on him: “It’s not my murder, Guy. It’s yours.” Soon, packages containing guns and maps of Bruno’s house  are being dropped off at the hapless Guy's door. What must the mailman think? How can our hero explain this nightmare situation to Metcalf’s Finest without getting himself into deeper guano? Since Bruno is wealthy and presents himself charmingly when he’s not knocking off conniving little liars, he can easily insinuate himself into the prestigious Morton family’s social circle, and promptly does so. My favorite example: while waiting to play tennis, Guy notices the crowd of spectators as their heads swivel back and forth, all following the ball—except Bruno, whose puckish yet unnerving gaze is fixed on Guy. When Bruno meets Babs, her ballpark resemblance to the late Miriam isn’t lost on him: similar coloring and build, even the same kind of glasses. No wonder Bruno gets, um, distracted at the Mortons’ soiree when he’s trying to playfully demonstrate the ease of strangling someone. Bruno’s subject, flibbertigibbet Mrs. Cunningham (Norma Varden, one of my favorite screen ditzes in such films as Witness for the Prosecution) is not-so-playfully almost choked as well when Bruno accidentally makes eye contact with Barbara, getting so caught up in memories of the murder that the guests have to peel his fingers off the wheezing, sobbing Mrs. Cunningham’s throat. Bruno faints, and Guy drags him to another room to recover.

When Bruno comes to, Guy gives him another one of our favorite Hitchcock shots, the “fisticam”—POW! Right in the kisser! (The “fisticam” was used well in North by Northwest, too! But I digress…) Meanwhile, poor freaked-out Barbara sobs to big sis Anne about the near-strangling. Anne puts two plus two together, and Guy finally levels with Anne about the Bruno situation. Now if only there weren’t police detectives watching Guy’s every move!
Since Bruno sent Guy a gun and a key to his house, Guy decides “to pay a little social call” on dear old Dad. Pop’s not home, but Bruno is (hiding in his father's bed, yet!). When Guy tells Bruno the “deal” is off, it’s frame-up time. “Don’t worry, I’m not going to shoot you, Mr. Haines," Bruno says coldly. "I’m a very clever fellow. I’ll think of something better than that. Much better.” Anne visits the mansion hoping to make peace, but Bruno drops hints about planting the lighter on the Metcalf fairgrounds at dusk. Wouldn’t you know Bruno’s gonna do it the very day that tennis pro Guy is scheduled to play at ?
If Guy cancels the match, the cops shadowing him, including Detective Leslie Hennessey (character actor/director Robert Gist of Peter Gunn, among others), will know something’s fishy. The result: a classic sequence that might have been silly if it hadn't been so skillfully filmed, performed, and milked for every last drop of suspense! Hitchcock, director of photography Robert Burks, and editor William Ziegler deftly cut between Bruno’s train trip to the fairgrounds and “thoughtful, methodical player” Guy in the tennis game of his life, playing like a madman and taking crazy chances in his desperation to finish (and win) the match fast so he can beat Bruno to Metcalf. (There's a man who takes his tennis seriously! :-)) Bruno’s vendetta hits a speed bump when he accidentally drops the telltale lighter down a storm drain, buying Guy time. I particularly enjoyed the playful turn Dimitri Tiomkin’s music takes as the panicky Bruno strains to reach the lighter while onlookers suggest solutions.
In addition to winning the tennis match, multitasker Guy gets a head start on John Law when spunky Barbara, as per their plan, delays Hennessey by flirting with him and “accidentally” dropping face powder on him. (Nowadays, Babs would have had to pitch her solid compact at him—ouch! :-)) Eventually, Bruno reaches the lighter, Metcalf, and the fairgrounds. Guy catches up with him, but so do the Metcalf police. A most unlucky chain reaction occurs as one cop's warning shot hits the carousel operator, who in turn falls on the speed lever. As an elderly carny (Harry Hines) crawls beneath the speeding carousel to turn it off, Bruno and Guy duke it out under the carousel horses’ hooves as the screaming riders hang on for dear life (for real! After that, Hitchcock swore he'd never make an actor do such a dangerous stunt again) . Bless him, Guy even manages to save a kid from being flung from the carousel while Bruno’s trying to stomp Guy’s hands loose. Alas, the carousel is shut down too abruptly (damn physics!), erupting in cataclysm, carnage and (if SoaT took place today) one hell of a class action lawsuit. Guy manages to escape with just a few bruises, but Bruno is dying, pinned beneath the wreckage. With the police surrounding them, Guy begs Bruno to stop the madness and confess to the murder. An evil bastard to the end, Bruno persists in blaming Guy for Miriam’s murder. Luckily, the witness who saw Bruno following Miriam around the fairgrounds that fateful night is there to set the lawmen straight, and as Bruno dies, his hand unclenches to reveal the incriminating lighter he never got a chance to plant. “Who was he, bud?” the witness asks Guy. “Bruno Antony,” Guy says grimly. “A very clever fellow.” 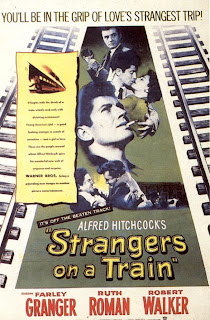