Blogging for Autism: Siobhan Maggie Bartilucci in One Million Words or Less 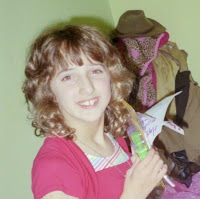 We interrupt our usual Tales of the Easily Distracted pop culture & fiction to take part in today's Moms Blogging for Autism
Siobhan* Maggie Bartilucci in One Million Words or Less
(*Pronounced “shuh-VON.”)
Our daughter Siobhan, who recently celebrated her 14th birthday, is a smart, upbeat young lady who loves her family, cartoons, playing, sweets, and swimming, more or less in that order. She happens to have been diagnosed with Asperger’s Syndrome, which causes her to behave in a more introverted way. By “introverted,” we don’t mean “shy.” (In fact, Siobhan often walks up to total strangers and asks them about themselves, which we discourage only because of the dreaded “stranger danger.”) In Siobhan’s case, “introverted” means that, for example, if she’s alone in an elevator she will, if not reminded, do the kind of things most people do when they’re all alone: she’ll talk to herself, dance around entertaining herself, etc.  Siobhan has also been diagnosed with ADHD, which means she does these things at great speed.  She’s very high-functioning and can be quite gregarious and charming, but she’ll close off quickly when her bank of conversation questions is depleted.
Siobhan is severely allergic to peanuts, tree nuts, and sesame, and must carry an Epi-Pen with her at all times. Luckily, she’s also a picky eater, so she always asks what things contain, and then doesn’t eat it anyway because it’s not pizza or a hot dog.  We try to encourage her to try new foods, but we don’t make a big thing of it because that way lies eating disorders, and nobody really wants to go on Dr. Phil.
Her avowed one true love is Sonic the Hedgehog, who she plans to marry as soon as she reaches legal age.  As long as he can provide for her in the style to which we’d like her to become accustomed, and the kids are raised Catholic, we’ve chosen not to keep them apart.
Siobhan’s musical tastes tend more to trance, including the work of Cascada and Paul van Dyk, with a good bit of Webb Wilder and the theme songs from the Japanese Sentai shows, the ones they use to make Power Rangers.  We’re all cartoon fans in our house, so her TV watching tends more towards animated fare from various decades.
She can and does sit through entire films and TV shows, but left to her own devices (said devices being the remote) will tend to pop about to her favorite scenes, re-running them endlessly, wearing a hole in the DVD and then who’s going to buy a new copy I ask you not me missy.
She has made the jump in the past year from random non-sequiturs spouted at inopportune moments to the correctly chosen cultural reference.  She’s slowly finding the way to make her eccentric affectations work to her benefit, and we enjoy watching it happen.
Siobhan is well aware of what rules are, and that they apply to her, but she sees no need not to try to get around them when not under scrutiny.  She comes from this honestly, being her father’s child.  While she’s sweet, she's not made of sugar, and can withstand reasonable discipline. Luckily, she’s basically a good kid, and far more affectionate and empathetic than most Aspies we've met. In addition, we've had a reward system in place since her kindergarten days, encouraging her to be on her best behavior. If she behaves well (e.g., getting homework and chores done, being respectful, all that good stuff), she gets a smiley-face drawn on her calendar for that day.  If she gets only three frowny-faces or less in the entire month, she gets to choose an end-of-the-month prize costing $20 or less as a reward. We’re happy to say this reward system works wonders with Siobhan; in fact, we can’t remember offhand when she last got a frowny-face! :-)