THE FALLEN SPARROW: Surrender to Dorothy! 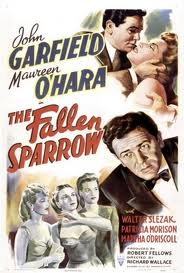 Before we begin, here's a NEWS FLASH for folks playing Page's Six Degrees of Separation game: our awesome fellow blogger Monty of All Good Things passed the baton to me, since the next Six Degrees involved linking Gert Frobe to Goldie Hawn. To my surprise, I got it in one stroke: Frobe and Goldie Hawn were both in the 1971 caper comedy "$" (a.k.a. Dollars). So I picked Myrna Loy and Danny Kaye for the next challenge for awesome fellow blogger Lara from Backlots. Thanks!

* * * * * * * * * * * * * * * * * * * * * * * * * * * * * * * * * *
And now for our feature presentation,  the subject of this week’s blog post, the 1943 film version of Hughes’ paranoid wartime thriller The Fallen Sparrow (TFS)!  Novelist Dorothy B. Hughes knew how to build a good head of paranoia and suspense in her novels. No wonder Hollywood knocked on her door after her first novel, The So Blue Marble (1940), became a best-seller! Three of Hughes’ 15 suspense thrillers were made into classic movies, including In a Lonely Place in 1950; Ride the Pink Horse in 1947; and of course, TFS. RKO skillfully and faithfully adapted Hughes’ novel for the silver screen. Director Richard Wallace (this versatile director’s wide variety of films included Captain Caution, Framed, and It’s in the Bag!), screenwriter Warren Duff, and editor Robert Wise had their hands full trying to condense the novel’s complicated relationships and events without watering it down. Hughes’ thrillers were brilliant, with memorable characters, but her plots are also quite complex, keeping readers on their toes as well as on the edge of their seats. It was worth it; all concerned did a masterful job of bringing TFS to the big screen!

Set in November 1940, TFS starts with the quote “...in a world at war many sparrows must fall....” The film brings us into the mindset of troubled yet determined hero John “Kit” McKittrick (John Garfield). Lt. Louie Lepetino, Kit’s boyhood friend, had helped him escape the Spanish prison where he’d been tortured for two agonizing years after the Spanish Civil War. Returning to New York City from a ranch rest cure, Kit’s stunned to discover that Louie’s been killed in a 12-story fall from a window at a swanky party for two wartime refugees, Dr. Skaas (Walter Slezak) and his nephew Otto (Hugh Beaumont before his TV stardom on Leave it to Beaver). Hell-bent on proving Louie’s death was neither accidental nor a suicide, Kit starts sleuthing, with help from pal Ab Parker (the likable Bruce Edwards, who earned his first film credit in TFS after many uncredited roles). Kit’s grim goal: killing Louie’s killer.

Hughes sure knew how to grip a reader with suspense while evoking the feeling and atmosphere of wintertime World War 2 Manhattan, even if some of her turns of phrase (such as a reference to one character’s “wrathy eyes”) looked a little odd to this modern reader. Her portrait of the era’s upscale café society characters and their milieu is presented with both glamour and bitterness as seen through war veteran Kit’s eyes. His viewpoint is especially intriguing because, it’s indicated, he’s had trouble fitting in for some time, having been raised in a working class environment only to be shoehorned into the glamorous life when his policeman dad came into money, which only turned into more money when his mother became a widow and married into the upper crust. When I first watched the movie version, I was glad to see the film got that right.

Kit’s suspects include just about everyone in his upscale circle of friends, especially the women, since he’s gotten it into his head that surely only a dame could’ve gotten close enough to Louie to shove him out a window. The trio of gorgeous suspects include:

Femme Fatale Candidate #1: Patricia Morison as Kit’s alluring old flame Barby Taviton. Stunning brunette Morison may not look like the blonde Barby described in Hughes’s novel, but she’s got the right sophistication and entitled attitude. Ironically, Morison’s many films included The Song of Bernadette and Song of the Thin Man, but she never sings in TFS! That honor went to:

Femme Fatale Candidate #2: Martha O’Driscoll as Whitney Parker, Ab’s young chanteuse cousin, affectionately nicknamed “The Imp.” The appealing O’Driscoll got plenty of work in the 1940s, including roles in Reap the Wild Wind and The Lady Eve, as well as playing Daisy Mae in the first film version of Li’l Abner from 1940. By the way, Whitney’s name was actually “Content Hamilton” in Hughes’ novel (she was the one with the aforementioned “wrathy eyes”), but I prefer Whitney’s new movie-friendly name. I must admit that as I read the book, my eyes kept tripping over the name “Content”! For all I know, “Content” might have been a popular name for girls back in the early 1930s and ’40s, but to my 21st-century eyes, reading “Content” as a person’s first name looked odd, yanking me out of the story several times before I finally resigned myself to it.

Femme Fatale Candidate #3: Team Bartilucci favorite Maureen O’Hara as  lovely, guarded, sad-eyed refugee Toni Donne, who’s falling in love with Kit despite her wariness (admittedly, Kit's a convincing, persistent fella), but there’s some terrible hold over her. O’Hara’s performance is a big change from the fiery, strong-willed redhead we all know and love from The Quiet Man and so many other great films. Somehow I think Toni and House of Cards’ Anne de Villemont should get together and start a support group for women in sinister neo-Gothic households!


But Kit’s biggest obstacle is that he has what we now call Post-Traumatic Stress Disorder. He’s still haunted by the memory of the mysterious man from Franco’s elite Nazi squad, a limping man (called “Wobblefoot” in the novel; in the film, he’s simply “The man who limps”) who tortured Kit relentlessly in his dark cell, trying to make our troubled but determined hero reveal where he’d hidden his regiment’s battle standard. (In the novel, the MacGuffin was a set of fabulous Babylon goblets the defiant Kit took from the enemy. The goblets are in the film, but Duff’s script emphasizes that battle flag and the symbolism behind it.) Even now, Kit struggles against fear as he imagines hearing the drag and thump that signaled his sadistic tormentor’s arrival—or is he imagining it? Terror mounts as Kit slowly realizes his enemies may have followed him home, maybe even planting their spies into every aspect of Kit’s life, placing not only himself in danger, but also his friends and loved ones. Even the innocent Whitney’s accompanist Anton is suspect—especially considering he’s played by young John Banner in his pre-Hogan’s Heroes days!

The role of Kit fits John Garfield like a glove (no, not a boxing glove, though Garfield seemed able to handle himself despite his real-life health issues). Even when his character is fighting his fears, he commands the screen as a working-class, self-described “mug” in gent’s clothing, with a heart full of determination and all-but-shattered ideals. Garfield’s toughness, tenderness, and humor have us rooting for Kit immediately. As in the book, Kit spends lots of time and energy trying to convince himself he’s not afraid, only to be proved wrong, to his frustration. Author Hughes’s haunting descriptions of Kit’s memories of his horrific Spain ordeal in the book are conveyed well in Garfield’s powerful monologue, enhanced by the camera’s slow close-up on his expressive face. The sweat on Garfield’s brow and the twitch in his cheek as he finally faces his enemy during the climax speaks volumes. If you ask me, TFS showcases one of John Garfield’s finest performances; he should have gotten an Oscar nomination!

Lovely Maureen O’Hara tries to downplay her Irish accent, but it still lurks in certain words. While our family adores O’Hara, I’ll admit she wouldn’t have been our first choice as a femme fatale, but Toni’s inner fear and regret come through in O’Hara’s poignant, soulful portrayal, winning my sympathy. O’Hara also has great fire-and-ice chemistry with the intense Garfield. When Kit kissed Toni in the novel, she never kissed back with any kind of enthusiasm, especially considering her cautious-bordering-on-icy reserve. But in this film version, Kit and Toni finally share longing kisses and tender embraces—much more fun to watch!

Walter Slezak’s performance as Dr. Skaas is silkily sinister, though I felt that his true evil nature was telegraphed much earlier than in the book, with his interest in “the cruelties of men towards other men” and “comparing modern scientific torture with the methods of the ancients,” who apparently didn’t mess with victims’ heads enough for Skaas’ liking! An avuncular hybrid of Sydney Greenstreet, Peter Lorre, and Clifton Webb, Slezak is one of 1940s cinema’s most memorable villains.
TFS keeps the paranoia percolating and the suspense simmering. I was especially glad to see that the filmmakers included much of the novel’s best dialogue, with only minor tweaks. They truly evoked the feeling and atmosphere of wintertime World War 2 Manhattan, underscored by Roy Webb and Constantine
Bakaleinikoff’s Oscar-nominated score. Today’s audiences might not understand Kit’s obsession with the battle flag, even with the explanatory scene at Toni’s home. Then again, I bet the men and women now fighting overseas will get the significance of a battle standard and what it symbolizes!

Although Dorothy B. Hughes’s mysteries were best-sellers in her heyday, they seemed to be all but forgotten after she retired to focus on her family. Luckily, the film version of TFS captures her tale of terror beautifully. If you want to read the book, Amazon.com has both new and used paperback editions available so you can rediscover her. Interestingly, the 1988 paperback edition I read had cover art with an uncanny resemblance to, of all things, the movie poster for The French Connection! 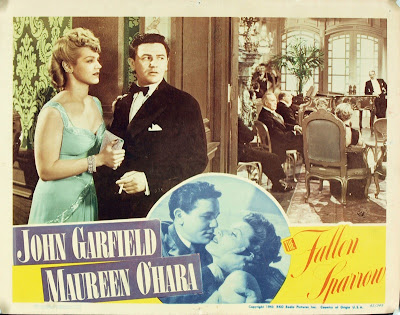 On the TCM Web site, writer Andrea Passafiume wrote, “RKO bought the rights to the novel in 1942, but the political backdrop involving Nazi villains and Spanish Fascists was a bit of a hot-button issue at the time. RKO executive William Gordon fired off a memo to producer Robert Fellows that stated his three ‘areas of concern’ about the story’s content: ‘1. Desire of State Department to maintain friendliest relations with present Spanish government. 2. Possibility of Spain as ally. 3. Offensive to most Latin Americans.’ He even suggested that the film’s reference location should be changed from Spain to Nazi-invaded France. Similarly, Joseph Breen of the Production Code Administration wrote to RKO saying, ‘We strongly urge that you consult your Foreign Department as to the advisability of the Spanish angle contained in this picture.’ Fellows chose to not be deterred by such warnings and moved forward with the film keeping all political angles and locations intact.”

TFS brims with ambiance even apart from its palpable paranoid atmosphere. An otherwise decidedly mixed review in The New York Times (and it wasn’t even by the ever-picky Bosley Crowther! The only identification in the Times’ review from August 20th, 1943 were the initials “T.S.”) said, “What lifts the film above the merely far-fetched and macabre is largely the skill with which Director Wallace has used both soundtrack and camera to suggest the stresses upon (Kit’s) fear-drenched mind. A street lamp shining through a fire escape throws a lattice across a sweating face; in a shadowy room, the remembered footsteps mingle with the tinkle of a bell and become the sound of dripping water from a leaking faucet. And again, when the climax is being quietly prepared at a refugee gathering in a mansion, the strident strains and swirling skirts of a gypsy dance brush momentarily across the silence between the warring opponents. Through these scenes and others Mr. Garfield remains almost constantly convincing, and without his sure and responsive performance in a difficult role, Mr. Wallace’s effects would have been lost entirely.”  Happily, The Fallen Sparrow is available from Warner Archive for all to enjoy on DVD and downloads! 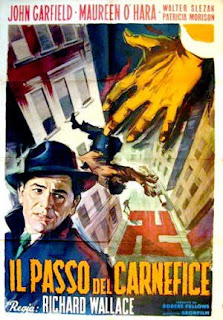