NIAGARA: Falling for the Wrong Girl Can Be Murder 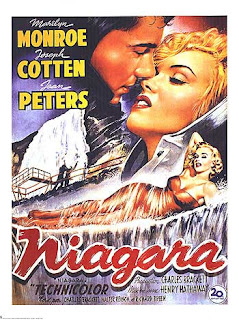 Niagara (1953) may have been filmed in dazzling Technicolor, but it’s got the black heart of a film noir! Directed by Henry Hathaway from a script by Billy Wilder’s frequent collaborator Charles Brackett (who also produced it), Walter Reisch, and Richard Breen, Niagara is a dark thriller despite the blue skies and white waters of majestic Niagara Falls; even Sol Kaplan’s music has a dark but lush tone, bringing to mind one of my favorite composers, Bernard Hermann. Director of Photography Joe McDonald (The Dark Corner, My Darling Clementine, Mirage) shot the beautiful, bright locations while still making atmospheric, suspenseful use of shadows and light. Even more dazzling is Marilyn Monroe in one of her earliest star vehicles; the film’s ads boasted about the film’s two “forces of nature,” Niagara Falls and Marilyn, and they meant it! Monroe is sultry and slippery in one of her last femme fatale roles before Gentlemen Prefer Blondes showed the world Marilyn’s funny side. 20th Century-Fox’s head honcho, Darryl F. Zanuck, wasn’t exactly Marilyn’s biggest fan. In the intro to the most recent TCM airing of Niagara, Robert Osborne reported that Zanuck felt she had no class, and that gals like her were a dime a dozen. What a dope! But the Marilyn Buzz was stronger and louder than Niagara Falls itself, so she got the upper hand; good for her! It helped that co-star Joseph Cotten was fond of her, and he was very kind and patient with Marilyn’s frequent tardiness. More importantly, Cotten recognized Ms. Monroe’s earnest determination to prove she wasn’t some here-today-gone-tomorrow type. Heck, after I learned all this, I was doubly impressed with Marilyn’s powerhouse performance, considering director Hathaway had a reputation as a tough taskmaster (see my blog post about The Dark Corner). Fun Fact: Niagara’s assistant director was Gerd Oswald, who went on to the TV series The Outer Limits.

Despite the happy cliché of Niagara Falls being a honeymooners’ paradise, Niagara The Movie is moody from the start as edgy George Loomis (Cotten) wanders around the Canadian side of the falls at dawn, feeling insignificant. He’s a war veteran freshly released from an Army hospital, where he was treated for PTSD, or as they called it back then, “battle fatigue.” He’s also got a gorgeous young sexpot wife, Rose (Monroe), so you’d think George’s life isn’t that bad. Ah, but Rose has thorns: a secret lover (Richard Allan, a tasty piece of eye candy) and a plot to kill George and make it look like suicide. In fact, Lover Boy is so secret that we never actually hear his name! For the record, old newspapers I checked on the Internet identified Richard Allan’s character as, variously, “Patrick” and “Ted Patrick.” In any case, George may not be the most stable guy, but I found myself feeling kinda sorry for him. This is why it’s so important to get to know someone before you get married (as Audrey Hepburn learns the hard way in Charade)!

Fate brings the Loomises together with Polly and Ray Cutler (Jean Peters and Casey Adams, a.k.a. actor/composer Max Showalter from Sixteen Candles, among others). Polly and Ray are at the falls for their late honeymoon, long delayed by eager-beaver Ray’s demanding job as a cereal executive. Ray brings his Winston Churchill book with him (he’s a regular Lance Romance, that Ray), but he promises Polly that “It’ll be as good as a regular honeymoon.” “It should be better,” Polly replies teasingly. “I’ve got my union card now.” They laugh and snuggle, and that’s one of the few happy moments Polly and Ray have together before the Loomises make their honeymoon into a living hell.

Things get creepy, starting with small, mild inconveniences, like our lovebirds settling for a cabin with a so-so view because Rose and the unwell George are still in the cabin Polly and Ray were supposed to have. While the Cutlers enjoy their tour of the falls, Polly spies Rose making out with her hunky hottie. At an outdoor party that evening, Polly almost misses a romantic moment watching the falls’ light show with Ray because she’s bandaging George’s hand after he cuts himself breaking Rose’s favorite romantic record in a rage. For her part, Rose just sits there and smirks. (It reminded me of the toga party scene in Animal House when, out of nowhere, John Belushi busts up folkie Stephen Bishop’s guitar, then gives it back to him with a deadpan “Sorry.”) Our sympathetic honeymooners get fed-up as they’re reluctantly pulled deeper into the Loomises’ problems, not realizing wily Rose is setting them up as witnesses to George’s increasingly shaky mental state, all the better to make his eventual death look like suicide. Like that’s not enough, Ray’s ridiculously jolly boss, Mr. Kettering (Don Wilson, from Jack Benny’s various shows) and his wife (Lurene Tuttle from Psycho and oodles of TV shows) show up, eager to sightsee with the Cutlers and schmooze with Ray about giving him a raise because of his prize-winning shredded wheat promotion idea, turning the honeymoon into a busman’s holiday. Oy!
By now, Polly and Ray have been through the wringer because of those loony Loomises, so even though Ray can be a chucklehead at times, I had to smile and sympathize with him being, to quote the High Noon theme song, “torn ’twixt love and duty,” sincerely wanting to take care of his distraught bride, yet reluctant to nix an opportunity to score a raise that would improve their life together in myriad ways. If the 1953 economy was anything like today’s economy, I can’t blame Polly for agreeing to include face time with the boss as part of their honeymoon itinerary! Peters and Adams make an appealing couple, sweet with a nice touch of insouciant playfulness. The peripatetic Ray clearly means well and loves Polly. Heck, he doesn’t even show any serious lust for the luscious Rose; he just makes good-natured wisecracks about her to Polly, and vice-versa. For that matter, I liked how Polly never acted catty or jealous around Rose. Now that’s self-confidence! As the calculating, manipulative Rose, Monroe smolders like nobody’s business, driving the fellas mad with her careless come-hither air and her curves in, as George grouses, a dress “cut down so low in front, you can see her kneecaps.” Monroe even gets to sing “Kiss” (no, not the Prince song), the lushly romantic tune that Rose and her secret sweetie like so much. It’ll come back to haunt her later, but I don’t want to give away the nifty twists! I’ll only say that Alfred Hitchcock would have been proud to call the bell tower scene his own. Admittedly, considering Hitchcock’s particular taste in female stars, I imagine Hitch would have picked a cooler, more subtle blonde than our Marilyn, dazzling though she is; I suspect Hitch would have considered Marilyn’s Rose Loomis to be more the Judy Barton type than the Madeleine Elster type . After the bell tower scene, the film almost literally drifts into Perils of Pauline territory, but by then I cared enough about the characters to stick around and see how it all worked out.

Cotten is at once terrifying and heartbreaking as Rose’s emotionally scarred fool for love/lust, a hard-luck guy who can’t seem to get out of his own way. We learn a lot about Rose and George’s relationship in little scenes and throwaway lines, like George admitting to Polly and Ray that he re-enlisted in the Army to show Rose he was still just as capable as any young stud. Then there’s the couple’s short-lived jubilance the day after that literally record-breaking fight. The Loomises laugh and kiss, with Rose under the covers in bed and George on top of her with the blanket between them (this was the 1950s, after all), talking about all the fun they’ll have when they hit Chicago. “Georgie, this is quite a change,” Rose purrs. “What brought this on?” George smiles at her. “You know what.” He gives her a long kiss. “When we have a fight and make up that way, I never want to leave your side.” Ooh, hot make-up sex — a little daring for a mainstream studio film of that era, no? All told, Niagara is good, dark, tawdry fun. By the way, keep an eye out for the uncredited Sean McClory of The Quiet Man fame (and many other movie and TV appearances) as Denis O’Dea’s right-hand man at the police station.